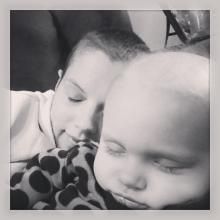 “God gave us long hair for a purpose, and He gave it to every human because God wants us to crown ourselves, to have all 26 parts of our skull in a situation so the solar polarity of our skull and brain is entitled to our infinite energy. He created us for that.”
-Yogi Bhajan 1/15/97

I have always kept my hair long with the exception of a less than stellar bowl cut in the first and second grade and the ever so stylish mullet that followed in the third grade. My hair has seemingly been my entire identity sitting on top of my head. It represents my gender, my sensuality, my fertility, my escape, my femininity, my intuition, my comfort, my beauty, my spirituality and my character. I never realized how much my hair defined me until it was no longer there.

Livinia was mostly bald up until the age of one when she was graced with minimal peach fuzz on her perfectly round head. Her full cheeks and endless smile always gave her a look of the happy Buddha. It took time, but when she reached her second birthday she had grown beautiful sandy locks that hung in tight ringlets that were playful and bouncy, which matched her vibrant spirit. She never needed a haircut and I envisioned letting her hair grow long and full as I silently promised never to give her a bowl cut or a mullet so she would never have to cringe at photos of her formative years.

I recall standing in the bathroom with Livinia when she was about two and a half. She stood next to me as I combed through my long locks and flipped my hair over to comb underneath. When I flipped back up I saw her sweet smiling face and bright eyes meet mine only to watch her imitate my combing and flipping motions with her innocent giggles. She was watching my every move and wanted to be like me. She admired me as much as I admired her, how profound. I believe that being loved and respected by a child is perhaps the greatest gift in life, but under the wrappings of that gift is life’s greatest challenge.

When Liv was diagnosed with cancer she began her eleven consecutive days of radiation before her regiment of chemotherapy. I remember thinking we had a few months or at least weeks before her hair would fall out. I remember knowing without any reservation that I would shave my head as well in support of her.

Livinia’s hair started falling out after only a few radiation sessions. Those days now feel like a lifetime ago though I can recall the exhaustion and the mind fog that came with the early morning trips to the hospital. I won’t soon forget holding her down while she screamed and cried with thrashing arms and legs and the look of sheer terror in her eyes as the anesthetist would tightly cover her mouth and nose with a mask to put her to sleep. Her body would fall lifeless in my arms and it was nothing short of a nightmare that I couldn’t wake from. I remember holding her in the recovery room and pulling her hairs off of my face and out of my mouth. My shirts, pants and coats were covered with strands, clumps and ringlets of her beautiful hair. What took two years to grow was falling out in just a few short days.

Upon waking from her nap one day, I asked Liv if I could give her a haircut and with surprising enthusiasm she granted permission. I was in admiration as she sat perfectly still on the bathroom toilet as I took scissors to her hair for the first time in her life. I will never forget how sacred it felt as I watched her curls drop to the floor. Upon finishing, she had a rather decent bob- cut.

After giving Livinia her haircut, I snuck into the bathroom alone. I played a recording of the mantra Ong So Hung by Guru Singh, which opens the heart chakra. I took the small trimming scissors and I cut my hair off piece by piece. I did it fearlessly. I did it with my whole heart. It was by far one of the most liberating experiences of my life. I went in to see my hairdresser a short time later and she shaved the rest of my hair off.

I have heard that in the Sikh tradition people do not cut their hair and neither do Native Americans as the hair is considered to be the holder of intuition. I remember seeing my yoga teacher after I shaved my head. Honestly, I was feeling a bit disheartened as it seemed I may have literally cut off my intuition, which felt disappointing to say the least. I had my head wrapped in a turban, but she had learned of my recent haircut through our community and my blog. She said, “Now you are like Guru Gobind Singh and the Buddha.”

I have heard that Buddhists shave their heads as a commitment to their holy life. I also learned that Guru Gobind Singh was the tenth Sikh Guru and he was a warrior, poet and philosopher. My teacher will never know how much her words meant to me. She lifted me in a way that only the words of a spiritual teacher could do especially during those most fragile days.

One thing I have learned about cancer is that you feel so powerless over it so when there is an opportunity to empower yourself and a person that you love who is suffering, then you just do it. When you face cancer in all of its rawness and vulnerability you may first see the loss of your hair as a sad visual representation of some disgusting disease. In time, though, you might just embrace the look as though it is a beautifully braided veil of warrior love because you have lived it, you have fought it and you have earned it. Love is more powerful than any disease. Love is more beautiful than any hairstyle. Love is the jeweled and flowered crown on your heart. Love is the force that removes all fear.

Bhavanjot Kaur is the owner and founder of Hamsa Healing Arts in Old Saybrook, CT. Bhavanjot is a 2003 graduate from Saint Joseph College in West Hartford, CT where she earned a BA in English with a concentration in writing and a minor in Psychology. Bhavanjot is a Kundalini Yoga teacher, Reiki Master & Teacher, Craniosacral therapy practitioner, and she also offers sound therapy with a 32" gong. Bhavanjot hosts the Graceful Goddess Women's Circle and various workshops on therapeutic grade essential oils, medicinal mushrooms and The Art of Reiki Levels I and II. She is a proud single mother to a two year old little girl who brings so much love and light to her world.