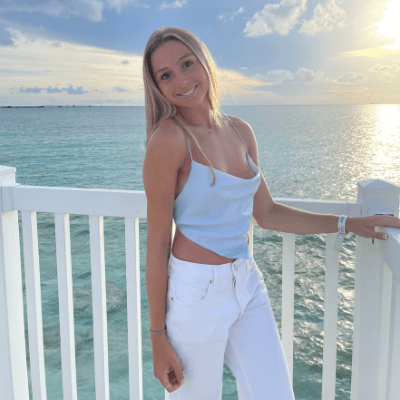 Life after cancer can be complicated and chaotic. But it can also be beautiful, meaningful, triumphant, defiant, ordinary, and extraordinary. In honor of National Cancer Survivors Day, coming up on June 5th, we wanted to share the stories of some of our beautiful friends who have lived through childhood cancer. And, to celebrate and remember Lucy, just as her 28th birthday has passed, we wanted to first introduce a very special young woman.

Meet Darian. Darian is a self-described extrovert, a college student and one of Lucy Grogan’s biggest fans! Lucy and Darian met as roommates at Children’s Hospital when Lucy was 10, and preparing for her bone marrow transplant, and Darian was 2, newly diagnosed, and starting a 30-day, in-patient chemotherapy cycle in her 2-year treatment protocol for childhood leukemia.

Darian was diagnosed with acute lymphoblastic leukemia on January 24th, just three weeks after her second birthday. Her mom, Ann Marie, had been noticing that her usually independent and happy toddler had become unusually clingy and fussy. When Darian developed what appeared to be a rash all over her body, her parents immediately sought out medical advice. The rash was soon identified as Petechiae, or tiny dark red spots caused by bleeding under the skin, which led to Darian's diagnosis.

Speaking with Darian today, her sunny, outgoing disposition shines through, but during treatment in the hospital her mom remembers how miserable Darian was, “eating, screaming, and throwing up on repeat.” However, she was given a bright light in her life during that painful time, an older roommate who treated Darian like her best friend - Lucy! Lucy would take Darian on adventures through the hospital hallways in her red wagon and enjoy elaborate tea parties in Darian’s crib at 3am, while their exhausted parents drifted in and out of consciousness. “She just made me really happy,” remembers Darian.

Darian survived her ordeal with cancer, though not completely unscathed. After treatment, she suffered from migraines that would go on all day, everyday up until the first grade, when they stopped briefly. However, they came back, and Darian had a 504 plan at school that allowed her to leave class when one came on. Another late effect that her doctors attribute to her cancer treatment, is chronic bloody noses. Recently, Darian wound up in the ER because she was bleeding for hours and felt faint. Despite these lingering effects, Darian is the last person to harp on any negatives.

“When people hear my story for the first time, the reaction is usually to gas me up -  telling me I’m so strong,and that they feel so bad, but it’s nothing to feel bad about. I feel lucky to be where I am today. And, I’m also grateful to have gone through treatment with Lucy, and to have known her. She was such a beautiful person.”

Years later, after Lucy passed and Darian was in remission, Darian, her mom and her brother, Chase, would meet Lucy’s Mom, Beecher, every year on Lucy’s Birthday to celebrate their friend and daughter. One year they went to see the movie, “Fault in Our Stars,” and Darian remembers what an emotional and special day it was.

Today, Darian has new roommates at the University of Delaware where she is a freshman, studying in the Medical Diagnostics Pre Physician Assistant program. She says that her history with the medical field played a pivotal role in the direction she’s taking for her future. She’s getting used to living away from home and her support system. There have been some bumps along the way, but she's made many new friends to make the transition a lot smoother.