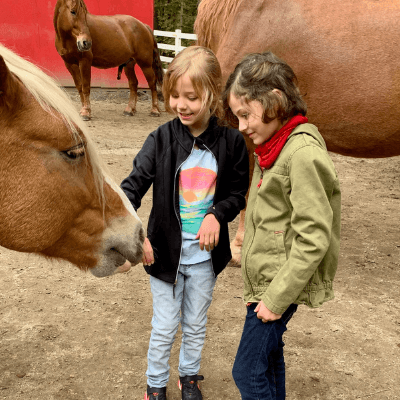 Adrianna and Vicky are as close as sisters can be. They’re 18-months apart in age - Adrianna, nine years old, and Vicky, seven years old. They love animals and nature, and enjoy playing with their Barbies, riding their bikes, and enlisting their puppy to be the robber in games of ‘Cops and Robbers.’ Since they were very young, they have been by each other's side.

On Christmas morning of 2015, Terri and Chris, Adrianna and Vicky’s parents, were concerned about Adrianna. The then three year old was pale, didn’t have energy to open her presents, and wasn’t excited about the holiday. They took Adrianna to their local ER, and from there she and Terri were transferred by ambulance to Tufts Children’s Hospital.

On a day that is supposed to be filled with joy and excitement, Terri and Chris received the devastating news that Adrianna had leukemia. Adrianna was admitted for blood infusions and treatment immediately. She and her mom spent the next month and a half at Tufts Children’s Hospital and for the first time in the girls’ lives they were separated.

This was the beginning of a three year cancer journey for Adrianna and her family. Whenever Vicky could be there, she would hold Adrianna’s hand through blood draws or bring her toys from the hospital’s toy box. Adrianna remembers offering the same kindness to a young boy, waiting to get his blood drawn. She told him, “I was scared the first time, but it will all be OK.”

Terri learned about Lucy’s Love Bus in 2017, and signed Adrianna up for therapeutic horseback riding to support her core strength and flexibility during chemo treatments. Vicky really wanted to ride with her sister, but at that time, funding was only available for the sick child.

This year, we are delighted to announce that Love Bus now offers siblings of pediatric cancer patients the opportunity to participate in healing right alongside their sister or brother. Terri is thrilled about the new program, explaining that it will make a huge difference for both girls to participate. The girls shared that they LOVE riding together, and Vicky let us know that the Love Bus sibling program is a huge “improvement,” a word she recently learned in school.

These days, the family feels grateful and relieved to have Adrianna’s treatment behind them. The girls are excitedly awaiting the delivery of an earthworm farm, playing with the Barbie house they got for Christmas, and looking forward to spring when they will go horseback riding together at Ironstone Farm.

Thank you for your generous gifts which deliver comfort and quality of life to deserving children like Adrianna and her heroic little sister, Vicky!